A twig snapped. Then another. A listening pause. Heavy footsteps broke through the brush. Something large moved through the dense forest next to me.

The hike began easily enough in the early morning mist on the coastal Cascade Head trail near Seaside, Oregon. It steeply angled up through the ferns and old growth forest. Completely alone, and at ease, I snapped off photos for paintings as I traipsed up the trail. 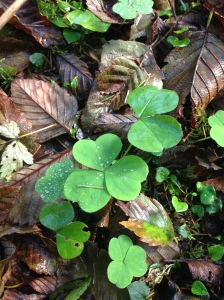 I encountered only birds and bugs as I climbed the silent trail. When I heard a large twig snap, I stopped, listened, then smirked. Being the outdoorsy girl I am, I figured a few elk or deer were browsing about. No biggie. Pretty cool. The footsteps began to get a little closer. I strained for a look-see, thinking these elk (by now, I knew they were much bigger than deer) were acting pretty bold, moving closer to me. Then…wait. A ripping sounded through the undergrowth. Crap. It had to be a bear, tearing up the bark in search of grubs. I firmly regretted:  A) Not having my husband with me, and B) Not having any type of weapon. Yikes. I snuck along for a while, trying to keep quiet and escape before it noticed me. But, of course, the trail switchbacked right back to the beast. Visions of the last Sasquatch show I watched on TV pressed on my brain. Was that breathing I heard? Deciding defense was my best offense, I stomped, shouted, and flapped my arms wildly. Really kept my cool. Nothing happened. Was it listening to me? Was it deciding I might make a great appetizer? Had it begun planning its strategic attack from behind?

I didn’t stick around to find out. Being the best example of the worst behavior, I turned and RAN! I made it to the viewpoint in no time at all, out of breath, legs burning, a sketchy look about me. But alive. Then I realized: This was not a loop trail. I had to return back the same way. ARGH!!

The next day, strolling along the boardwalk of the quaint little town of Seaside, I relayed my story to my husband. We both chuckled. Ha. How silly. How child-like. It all seemed so distant and un-scary. In fact, the day was so civilized and calm that when I came across a white picket fence (yep), containing a most amazingly robust dahlia display, I had to snap off a couple of photos of its beautiful benign-ness. The soft light, the beach in the distance, and the gorgeous flowers confirmed that maybe I hadn’t been so scared. All was fine! Sasquatch(bear?) be damned!

Back in the studio, I used a strange thing in my slightly crazy watercolors. I had to respond in some way, to the weirdness in the forest. Fabric paint. Yep.

Need I say that, in the early 90’s, I, too, was a victim of the Fabric Paint Addiction. For reals. I bought clothes and fabric-painted (3-D, no less) on them. A LOT. And gave them away as gifts. Many gifts. Umm..yeah. 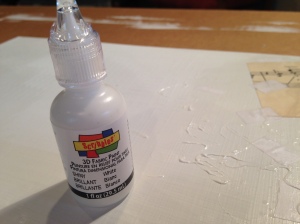 For this painting, however, it is un-recognizable as the 90’s puff-paint. Don’t tell anyone. I covered it completely with gesso after it dried to keep the painting archival. Although I would like to have had more fluidity with the material, it definitely gave the painting base texture of scribbles. 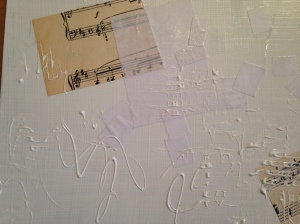 Sheet music with fabric paint on the Texi Plex

The fabric paint provided scribbles, dots, and textural blurbs over sheet music. A gridded plaster tool pulled through the wet paint provided interesting texture, shown on the right side of this photo: 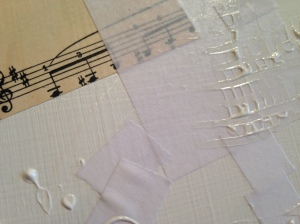 Plaster tool effect on the right side of the Texi Plexi

I had the photo/drawing of the dahlias in mind for this painting the whole time I worked on texturizing the plexi. In this way, I was able to plan that the fences and plant stems would roughly be where the grid lines were, and the dirt/concrete sidewalk at the left hand side would be where the scribbled fabric paint was. 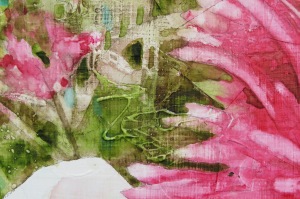 This really is, truly, one of my favorite paintings. Not sure how many I have now, but this one is up there. Here is the finished result.

The photo, above, simply does not do this painting justice. Beachy Dahias color and texture is vibrant and intriguing, and unusual in watercolors.

Profound thoughts? Not so profound? I'd love to hear it! Cancel reply